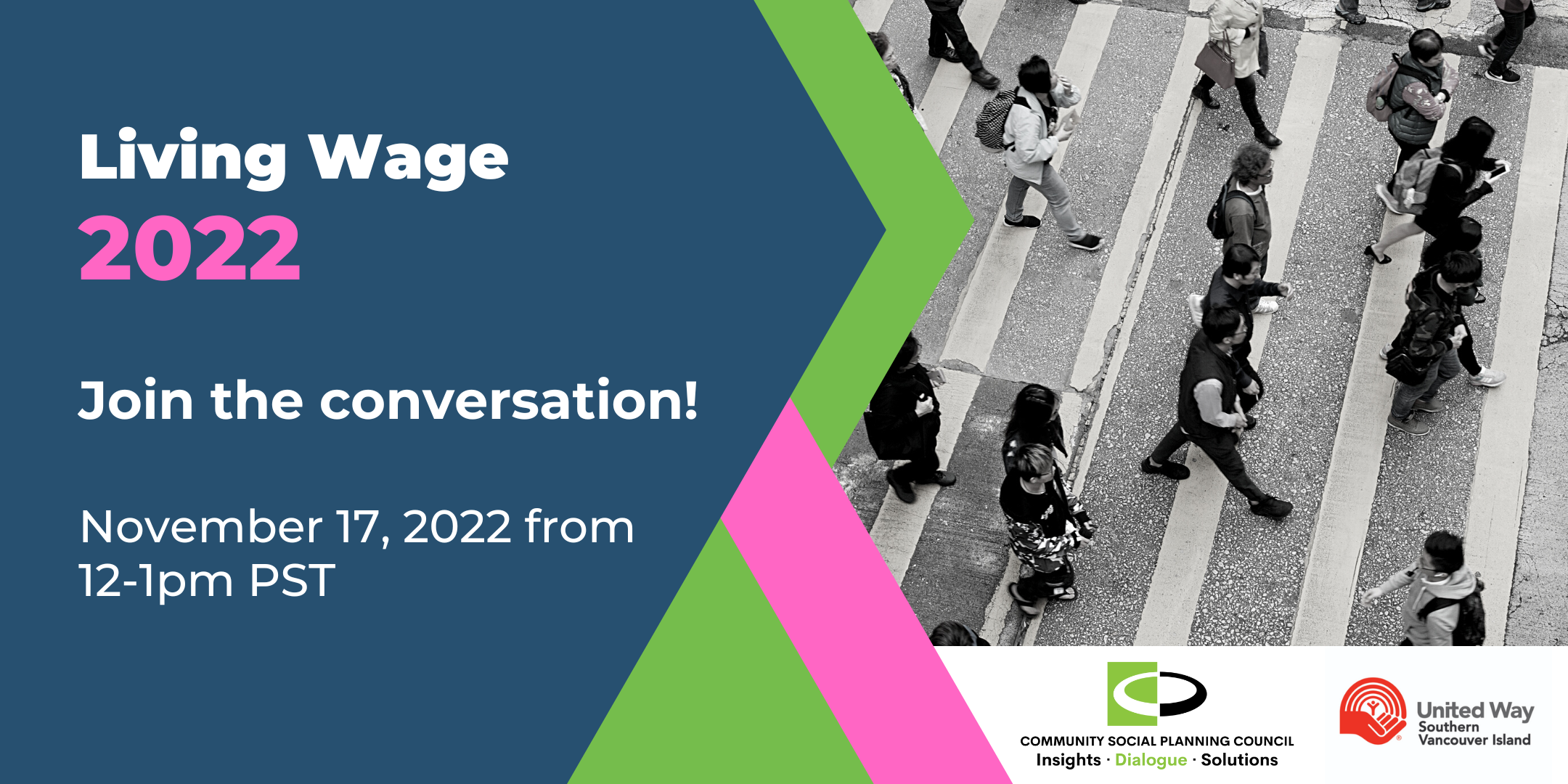 The Living Wage is the hourly wage that two working parents with two young children must each earn to meet their basic expenses (including rent, child-care, medical needs, food, and transportation), once government taxes, credits, deductions and subsidies have been taken into account. The Living Wage for our region is calculated annually by the Community Social Planning Council of Greater Victoria (CSPC).

As those in the region can attest, the cost of living continues to soar.

Join us on November 17, 2022, from 12-1pm to discuss the living wage, and ways in which we can make life more affordable in our region.

Guest speakers at the event will consist of a panel of Living Wage advocates, community members, and local business owners.

This event is part of the CSPC's continuing dialogue on affordability and is in partnership with the United Way.

The CSPC acknowledges the Songhees, Esquimalt, Tsartlip/W̱JOȽEȽP, Tseycum/WSIḴEM, Tsawout/SȾÁUTW, Pauquachin/BOḰEĆEN, T’Sou-ke, Scia’new and Pacheedaht Nations who have a historical and ongoing relationship to the land where our offices and work are based. We commit to active listening and humility in working with Indigenous Peoples. 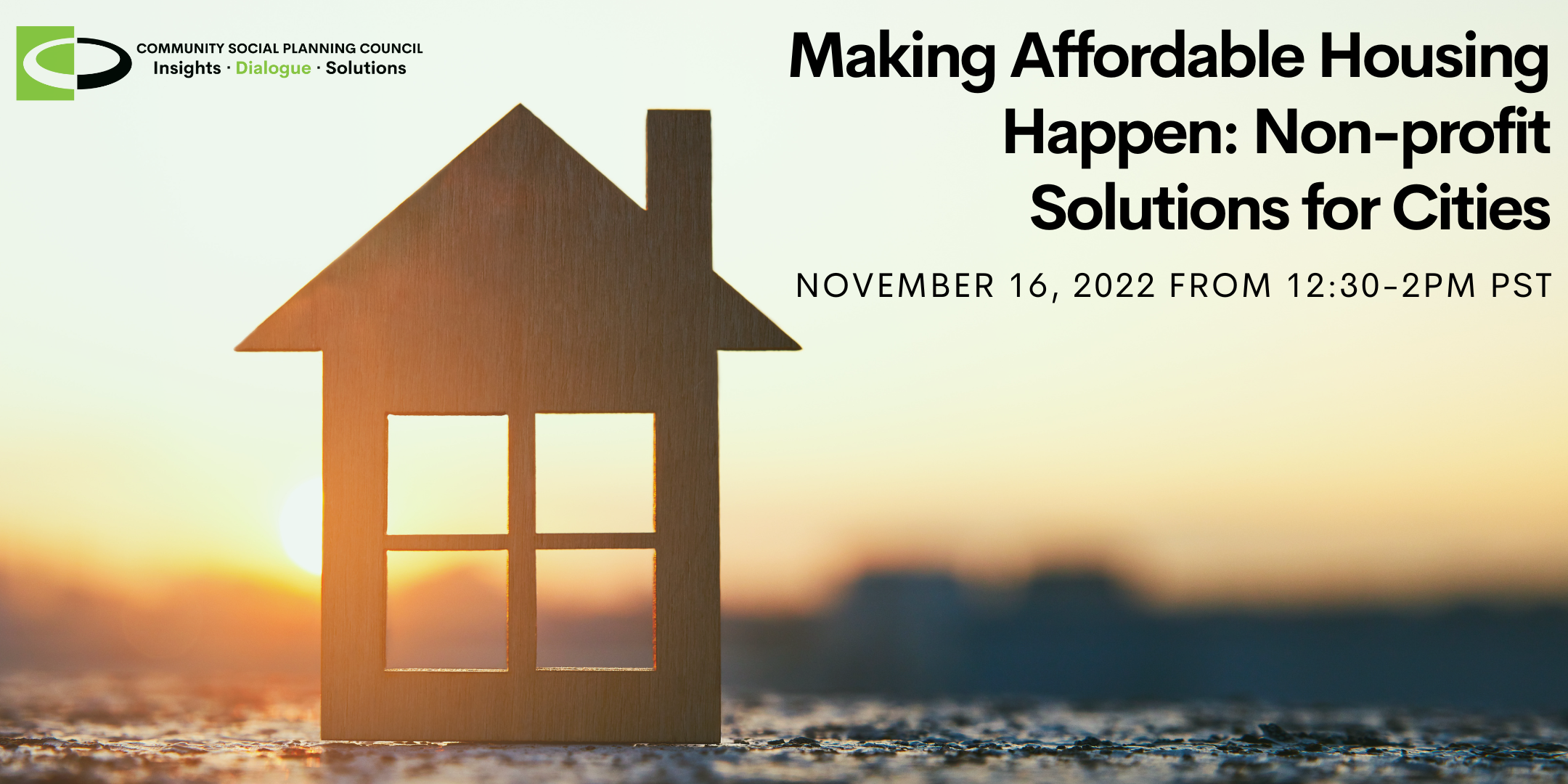 What is affordable? What can municipalities and the non-profit sector do to help achieve affordability?

Housing affordability has been out of reach for many people living in our communities for a substantial period of time. A change to the status quo is necessary in order to develop a healthy economy where housing serves as a home and a place of shelter, not just an asset.

Join us from 12:30-2pm PST on November 16th as municipal leaders in the non-profit field discuss non-market solutions to the housing crisis. Past reports and webinars such as the Housing Needs Assessment, Drivers of Homelessness, and Tenant Displacement Protection will provide a base for much of the conversation.

Stick around for the last 30 minutes of the webinar for the Community Social Planning Council's AGM.

Speakers at the event will include:

This event is part of the CSPC's continuing dialogue on housing affordability, learn about our initiatives here.

The CSPC acknowledges the Songhees, Esquimalt, Tsartlip/W̱JOȽEȽP, Tseycum/WSIḴEM, Tsawout/SȾÁUTW, Pauquachin/BOḰEĆEN, T’Sou-ke, Scia’new and Pacheedaht Nations who have a historical and ongoing relationship to the land where our offices and work are based. We commit to active listening and humility in working with Indigenous Peoples. 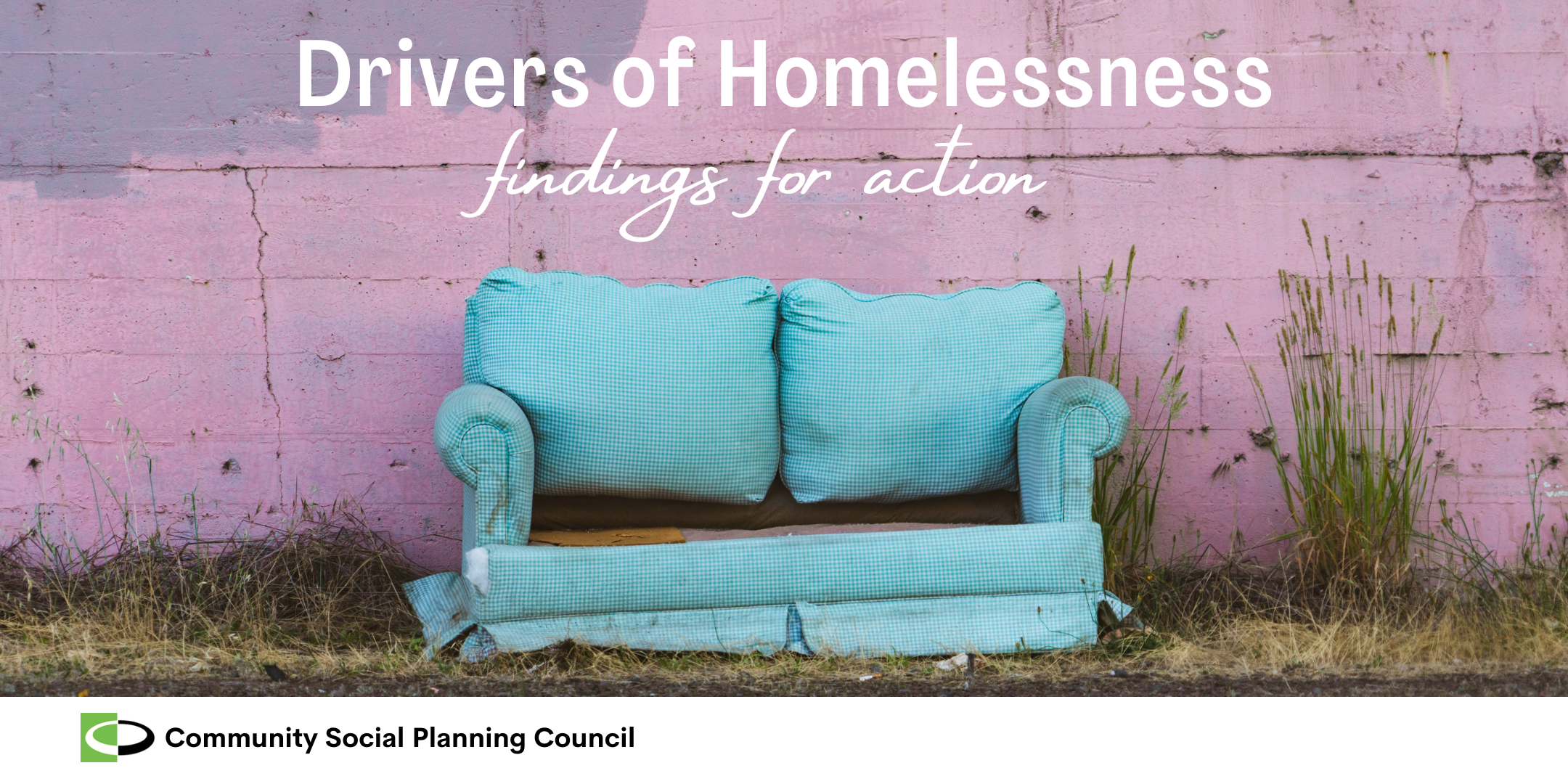 On June 22, 2022 local, provincial, and national experts on housing and homelessness discussed the CSPC's new report, Drivers of Homelessness: Findings for Action.

Speakers at the event included

Drivers of Homelessness answers key questions and dissolves persistent myths regarding the ongoing housing and homelessness crisis in Greater Victoria:

This event will include the launch of a SPARC BC funded report that examines the drivers of homelessness in Greater Victoria through the analysis of CSPC’s homelessness prevention program The report will inform evidence-based conversations in the public and the media and support local policymakers in preventing and ending homelessness in our region.

Pandemic, housing crisis, economic pressures — how are different families in Victoria experiencing this challenging moment, and how can we support their overall social, economic, and mental well-being and resilience in the region? The facts presented in this info sheet reveal where challenges continue to present themselves and point us in the direction of solutions.

Download a PDF of the No Family Left Behind Fact Sheet. 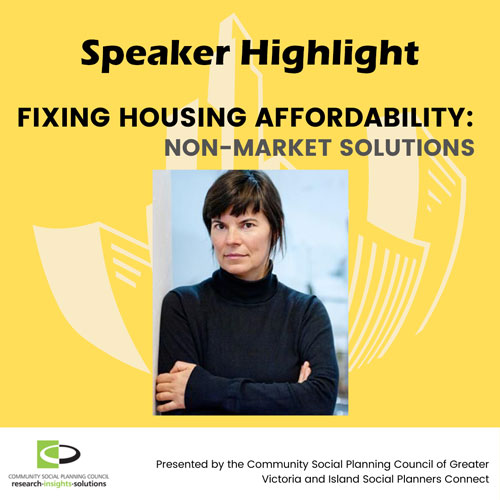 Gabu Heindl is an architect and urban planner in Vienna and head of GABU Heindl Architektur in Vienna, a interdisciplinary studio specialized in public interventions, cultural or social buildings, urban research and urban planning. 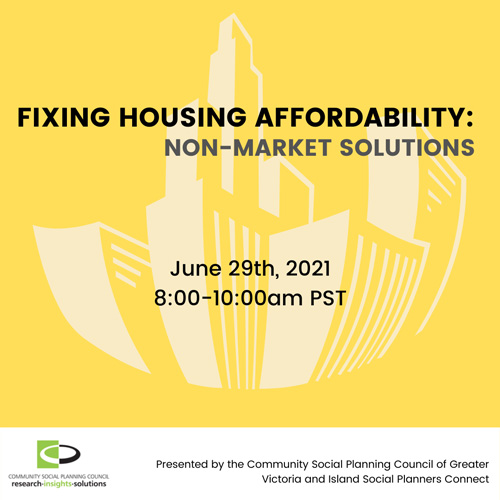 Join us to learn about European and American non-market housing models and envision a future of affordable housing across British Columbia.

This event is hosted by the Community Social Planning Council of Greater Victoria in collaboration with Island Social Planners Connect. If you have the means, your donation helps support this event, which is running without funding.

It’s hard to admit that without changing the status quo, a healthy housing market may never come back to communities on Vancouver Island. As evidence of market failure becomes more and more apparent, do we need to look to a broader set of solutions?

This workshop will explore options for non-market housing solutions locally by first investigating examples from elsewhere—including Vienna, where over 60 per cent of residents live in city-built, sponsored or managed housing—and then imagining what role such models could play here at home to solve our affordability crisis.

This event will be hosted virtually from our work spaces on the traditional territories of the Lkwungen (Songhees) peoples, who have a historical and ongoing relationship to this land.

British Columbia’s annual minimum wage increase went into effect last week with a 60 cent increase to $15.20/hour. Despite this increase, the minimum wage still falls almost $5 short of Victoria’s living wage for families. The 2019 living wage for the City of Victoria is $19.39/hour for families and even higher for individuals meaning the new minimum wage still leaves a large number of families and individuals living below the poverty line.

Increasing the minimum wage always creates tension at both ends of the spectrum– with people worrying about the clear fact that the minimum wage is still not sufficient while others worry about the price paid by local small businesses. There are win-win solutions.

The minimum wage places the burden of cost of living challenges on either individuals who are living in poverty or businesses. The government can spread that burden across taxpayers more fairly by addressing drivers of the costs of living. The recent changes to child care costs is a great example of this – the living wage went down for families when the government invested in affordable childcare.

A major driver of the high cost of living and high poverty rates within Greater Victoria, is housing. According to the 2016 census, 16,720 people within the City of Victoria are spending more than 30% of their income on housing and one in five are spending more than 50%. There is a dire need for an increase in affordable housing and this could significantly help close the gap between the minimum wage and living wage. The development of direct purpose built public or non-profit owned and operated housing is crucial.

In the shorter term, there are concerns by businesses hard hit by the pandemic now facing increases in wages. However, minimum wage workers are disproportionately concentrated in larger corporations that weathered the pandemic well and are profitable. These larger profitable businesses, such as multinational firms should, and are able to, pay the higher minimum wage. It is in the interests of our local economy to capture the profits being made locally by large multinationals through higher minimum wages that will be spent locally on goods and services.

Concern regarding the wage increase and its effect on small businesses is increasingly relevant in the current economic climate of COVID-19. For those small independent local businesses, wage subsidies and other supports will be crucial throughout the COVID-19 recovery period. Further, strengthening our social programs such as employment insurance would help to protect any workers negatively impacted.

One thing to remember is that with increased wages comes a stimulated economy- as people have more to spend, there is more spent in local businesses. This is particularly the case for lower income workers who have the highest likelihood of spending their money locally on goods and services instead of a condo in Hawaii. This is why studies are showing that minimum wage increases can have an overall positive impact on the local economy. These same studies are showing that there is room to move to higher minimums, even potentially setting a floor at 80% of average salaries.

The path to a living wage is twofold – Firstly, it requires public solutions to address the high cost of living, particularly housing and secondly, it requires making the minimum wage a living wage. Not only is this doable, but frankly, we can’t afford not to.

Check out the CSPCs most recent living wage report: https://communitycouncil.ca/new-living-wage-for-great-victoria-2019/ 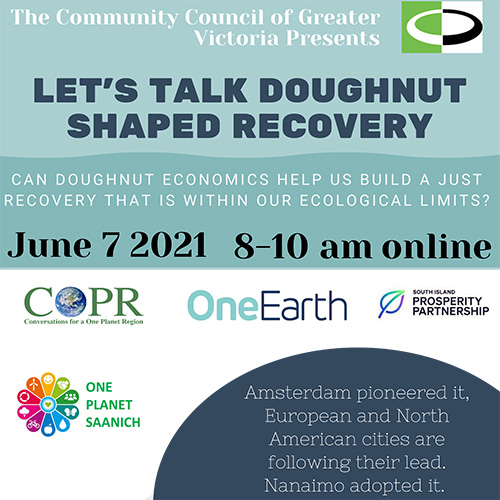 Can doughnut economics help us build a just recovery that is within our ecological limits?

Are you a municipal leader or planner? A local business owner? A community leader? An interested community member? Are you working to merge social and environmental values in your work?

Join us to hear from Andrew Fanning of the Doughnut Economics Action Lab in Oxford, Julia Lipton, Head of Innovation for C40 Cities in Copenhagen, Councillor Ben Geselbracht from Nanaimo and other municipal and community leaders in regions that are implementing a Doughnut Economics approach.

Kate Raworth’s idea of Doughnut Economics, is arousing a great deal of interest. The idea is simple. The economy has to be large enough to provide a decent standard of living for everyone (food, shelter, sanitation, education etc.), but small enough to stay within our ’ecological ceiling.’

Amsterdam has pioneered it, other European and North American cities are following their lead and here in Canada, the City of Nanaimo recently agreed to adopt it. Greater Victoria is coming together to talk about it. 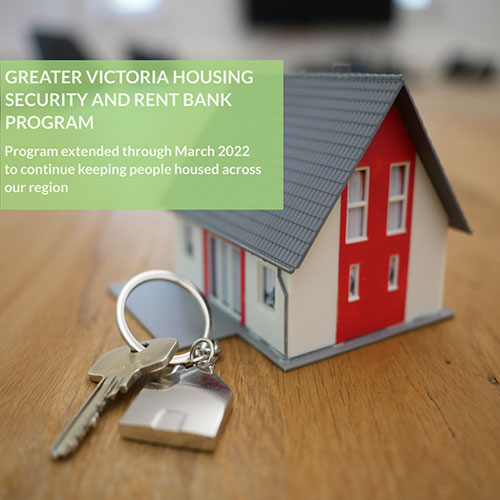 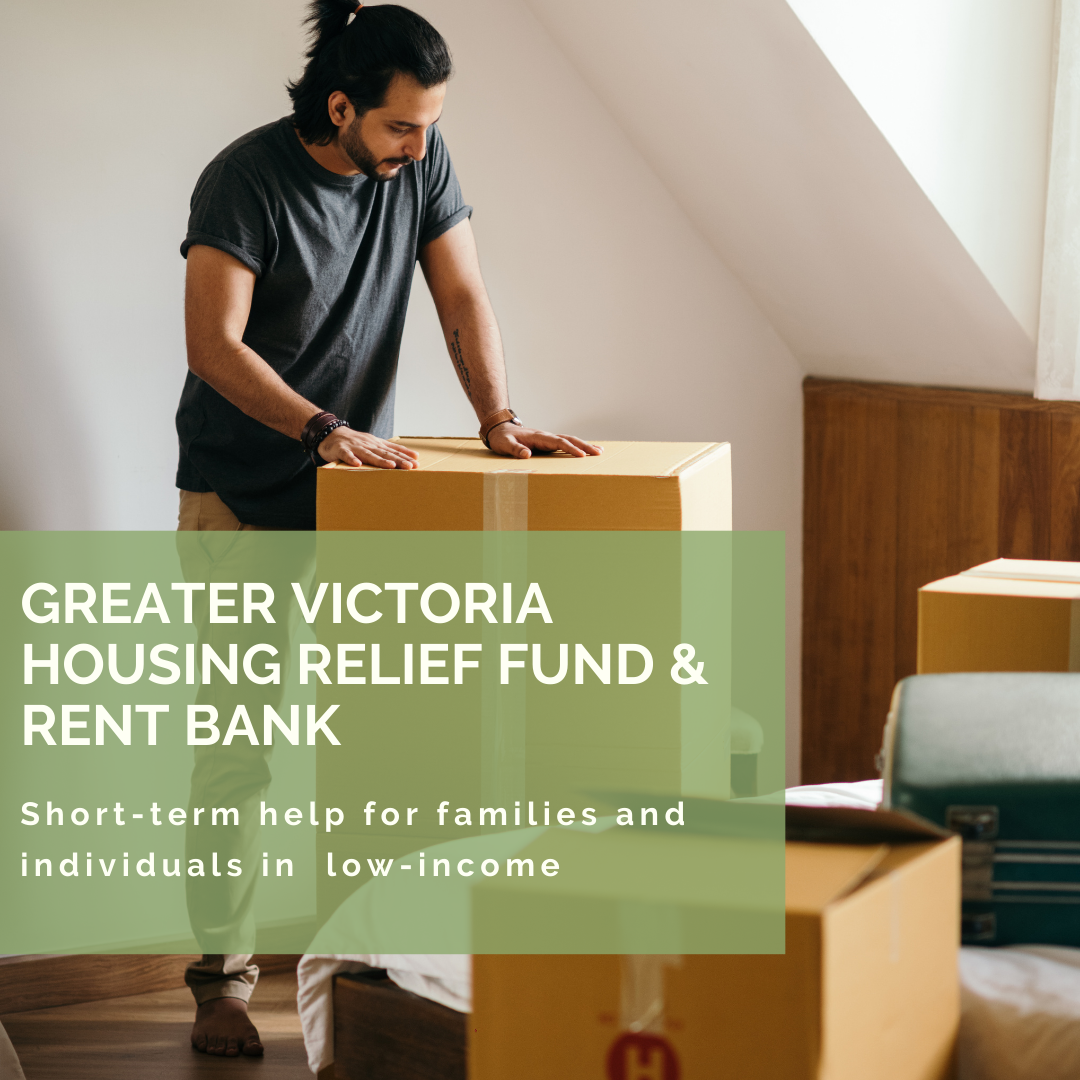 The Community Social Planning Council of Greater Victoria and BC Rent Bank are launching a Rent Bank which will provide short term financial help for low-to-moderate income households at risk of losing their housing due to a temporary financial crisis. In conjunction with this the Community Council is also launching the Greater Victoria Housing Relief Security Fund, a one-time housing grant program between February and the end of April to provide eligible applicants with support for rent, essential utilities, and basic needs.

For more information on this program and to view eligibility requirements, please visit: https://communitycouncil.ca/rentbank/