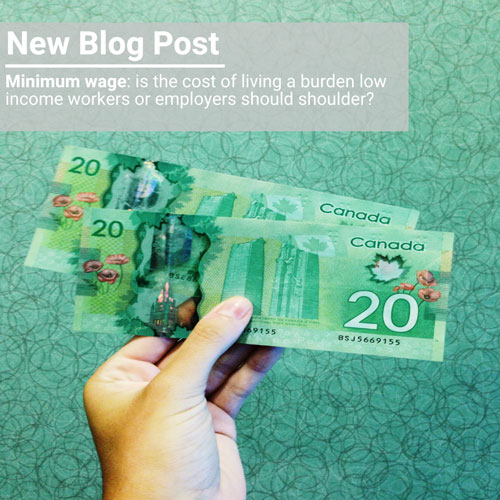 British Columbia’s annual minimum wage increase went into effect last week with a 60 cent increase to $15.20/hour. Despite this increase, the minimum wage still falls almost $5 short of Victoria’s living wage for families. The 2019 living wage for the City of Victoria is $19.39/hour for families and even higher for individuals meaning the new minimum wage still leaves a large number of families and individuals living below the poverty line.

Increasing the minimum wage always creates tension at both ends of the spectrum– with people worrying about the clear fact that the minimum wage is still not sufficient while others worry about the price paid by local small businesses. There are win-win solutions.

The minimum wage places the burden of cost of living challenges on either individuals who are living in poverty or businesses. The government can spread that burden across taxpayers more fairly by addressing drivers of the costs of living. The recent changes to child care costs is a great example of this – the living wage went down for families when the government invested in affordable childcare.

A major driver of the high cost of living and high poverty rates within Greater Victoria, is housing. According to the 2016 census, 16,720 people within the City of Victoria are spending more than 30% of their income on housing and one in five are spending more than 50%. There is a dire need for an increase in affordable housing and this could significantly help close the gap between the minimum wage and living wage. The development of direct purpose built public or non-profit owned and operated housing is crucial.

In the shorter term, there are concerns by businesses hard hit by the pandemic now facing increases in wages. However, minimum wage workers are disproportionately concentrated in larger corporations that weathered the pandemic well and are profitable. These larger profitable businesses, such as multinational firms should, and are able to, pay the higher minimum wage. It is in the interests of our local economy to capture the profits being made locally by large multinationals through higher minimum wages that will be spent locally on goods and services.

Concern regarding the wage increase and its effect on small businesses is increasingly relevant in the current economic climate of COVID-19. For those small independent local businesses, wage subsidies and other supports will be crucial throughout the COVID-19 recovery period. Further, strengthening our social programs such as employment insurance would help to protect any workers negatively impacted.

One thing to remember is that with increased wages comes a stimulated economy- as people have more to spend, there is more spent in local businesses. This is particularly the case for lower income workers who have the highest likelihood of spending their money locally on goods and services instead of a condo in Hawaii. This is why studies are showing that minimum wage increases can have an overall positive impact on the local economy. These same studies are showing that there is room to move to higher minimums, even potentially setting a floor at 80% of average salaries.

The path to a living wage is twofold – Firstly, it requires public solutions to address the high cost of living, particularly housing and secondly, it requires making the minimum wage a living wage. Not only is this doable, but frankly, we can’t afford not to.

Check out the CSPCs most recent living wage report: https://communitycouncil.ca/new-living-wage-for-great-victoria-2019/