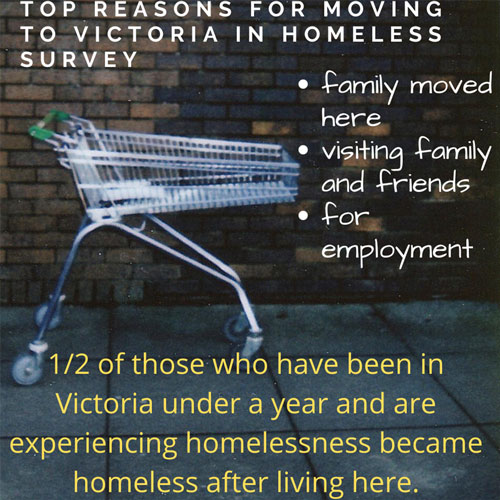 Of those 854 individuals surveyed, 101 individuals (12% of those surveys) have lived in Greater Victoria less than one year. Half of those 101 became homeless after moving to Greater Victoria. For context, within the last year approximately 6,000 people were new to Greater Victoria. In-migration has been critical to the vibrancy of the region; our aging demographic means a declining population without in-migration. Further, employers have raised concerns about labour shortages while one of the top reasons individuals who are homeless report coming to the region is to seek employment.

It is harmful to jump to conclusions about why people who move to Victoria are experiencing homelessness. While people listed a multitude of reasons for moving to Greater Victoria, top reasons are: family moved here (18.5%), to visit friends and family (13%), and to seek or secure employment (12%). There were 38 individuals who included access to services and supports as one of the reasons they moved to Greater Victoria. Hardly a landslide – and one third of those individuals came from other parts of Vancouver Island, suggesting that smaller communities on the Island do not have the supports and services needed by those trying to find stable housing and/or employment. That is something that needs to be fixed.

There is misinformation in the media that there is an upward trend in people who are new to Victoria and homeless. The opposite is true. Since the 2016 PiT Count and Survey, the data indicates a decline in the number of people experiencing homelessness who have lived in the region for less than one year.  However, it is important to note that the Point in Time Count is considered a rough snapshot and an under-estimate; changes in numbers might be due to an increase or decrease in survey response rates, which could be driven by changes in the number of surveyors or organizations participating or external factors that affect participation.

The PiT Count and Survey is not meant to discriminate against people and the length of time they have lived in the region. Whether someone has lived here for 5 months or 50 years, everyone has the right to access homelessness services and supports to ensure that all community members have access to permanent housing.

By Diana Gibson and Chelsea Fiorentino